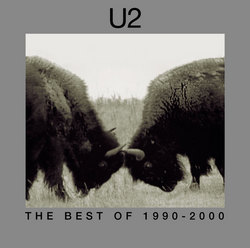 The second volume of U2's Best of Collection, covering the years 1990-2000, was released on November 4th, 2002.
A limited edition 'Best of the B-sides' was also released, along with a new single Electrical Storm and , the following month, a 'Best Of 1990 - 2000' DVD.
This second volume of U2's Best Of collection covered the years from 1990 to 2000 and its sixteen tracks are highlights of the albums Achtung Baby, Zooropa, Passengers: Original Soundtracks 1, Pop and All That You Can't Leave Behind.
Two brand new tracks were also recorded for this set, Electrical Storm and The Hands That Built America featured on the soundtrack to the Martin Scorsese movie The Gangs Of New York.
In addition, four songs, Discotheque, Gone, Numb and Staring At The Sun were substantially reworked by producer Mike Hedges.

'We turned on ourselves, in a way having fun with some of the ideas of ego that we were playing with. And we managed to give ourselves a bit of freedom, a bit of room to breath.'
Bono